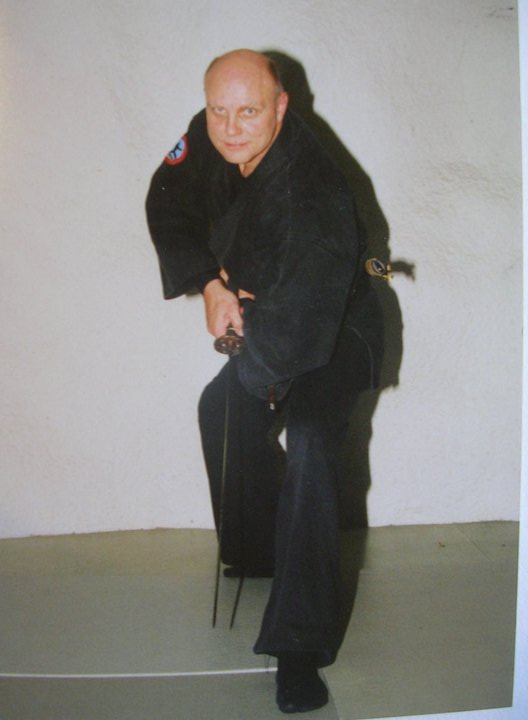 “I’m trying to be for instead of against”, was the first thing Sveneric Bogsater

told me when I started to interview him. In front of me there is an impressive

world’s finest in our martial art. But you’ll never notice that, except when you

see him playing around on the tatami. In spite of his status, he remained down

to earth and freindly. In fact his friendliness is one of the first things you notice

when you go to a seminar taught by him.

positive way. He tries to be as optimistic and happy as possible in life, this by

always being positive. “Don’t be against war, be for peace”. “Don’t tell anyone

to quit smoking because he will die if he doesn’t. No, tell him he’ll live longer if

Off course it isn’t possible to be like this day in day out, but it can help you to

find peace and harmony in your life. I’ve met Sveneric a couple of times now

happyness in his life. In my opinion, his worldy wisdom will probably have

something to do with his age too, because experience means a great deal, also

Before I start to tell you the history of his martial life, some facts. At the

Mariette van der Vliet. He claims to have 3 children, namely 2 cats and a dog.

When Sveneric was about 5, he was a small and slender kid (you really can’t

imagine if you see him now). He told me he was afraid of everything and in his

own words “I was a fucking coward”. At some point the girls in school had to

defend him in a fight (well this sounds familiar, check Takamatsu sensei’s bio).

violence is wrong, he had to stick up for himself. To help the little Sveneric, his

sweaty bodies while entangled in a fight…. it wasn’t something for a kid like

He often complained about that to his father, and someday some policeman of

Judo. That was the beginning of the martial life of Sveneric, since that day he

Age 15, he took up Kyokushinkai karate (a full contact karate style). He did

this for about 10 years. Sveneric quit Kyokushinkai karate when it changed

structure (when he came back from his military service). He thought that there

was too much emphasis on the competition. People where pushed to compete

in full contact fights before they were ready for it, all for the glory of the club.

The following year, he practiced some other style karate (Wado ryu if I’m not

At that point in life, Sveneric was looking for the philosophy behind martial

arts, therefore he started practicing Aikido. But with his long history as

Karateka that didn’t work out very well (as we all know, those 2 systems are

quite different). So eventually Aikido didn’t work out the way he wanted and he

didn’t find any philosophy there either. “If even Aikido has no philosophy deep

within, I can better concentrate on the true roots of martial arts, and that is

fighting!” Sveneric thought, and he joined a ju-jutsu club (after about 2 years

of Aikido). In the next 12 year of ju-jutsu he studied about 3 styles.

In the club where he practised ju-jutsu, different martial arts where taught,

including Judo. When a certain person called Bo Munte (you already see where

this is leading too…) got his judo shodan, he received a book. The book was

about Ninjutsu. Bo got interested and went to Japan to meet Hatsumi Sensei

(~ 1970). After his return Bo started teaching ninjutsu in his garage.

That was the true beginning of ninjutsu in Europe, the first European got in

touch with ‘The martial arts of distance’.

In 1983 Bo opened his first real dojo. This was the beginning of Sveneric’s

Bujinkan adventure that till this day on still continues. The real beginning,

because at that point he quit all other martial arts. It was also the year in

which he went to Japan to meet Hatsumi sensei for the first time. The dojo

flourished and Sveneric became instructor together with Larry Jonsson. Small

note: Larry Jonsson is not a student of Sveneric (as is often wrongly

suggested), he started ninujtsu a year earlier than Sveneric. Of that first group

That small group introduced Europe to ninjutsu. Sveneric and Bo went to

and make it as well known as it now is.

This entry was posted in ANGLAIS / ENGLISH.